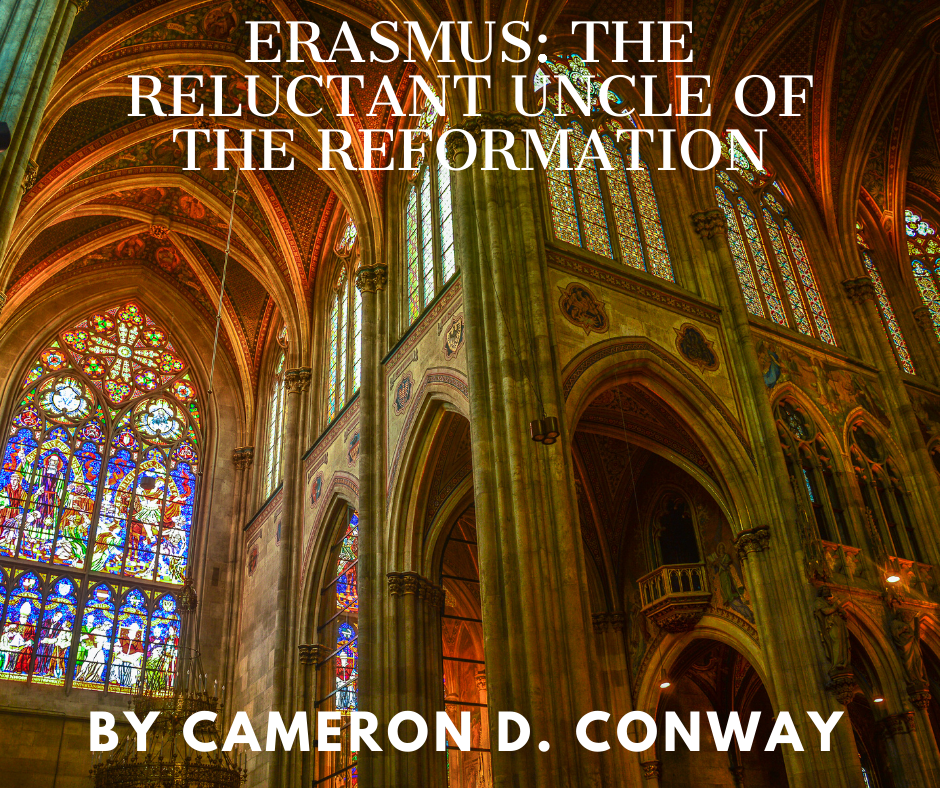 When studying the history of the continental Reformation our attention is primarily drawn to the so called “fathers” of the Protestant movement such as Zwingli, Calvin and Luther. However, they should be seen as the benefactors of others who set the stage in Europe for the theological quaking of the sixteenth century. One of those precursors of the Reformation was Desiderius Erasmus Roterodamus (1466 – 1536), commonly known as Erasmus. While relatively unknown in Protestant circles his efforts helped pave the way for the likes of Luther to rise up and critique the established Catholic church. But how exactly did this devout Augustinian monk become what we could call the reluctant uncle of the Reformation?

The Early Years of Erasmus

At the beginning of his life in the Netherlands Erasmus became steeped in the ideas of humanism which were springing up in the latter part of the fifteen century. It was during his early years in Gouda and later Deventer that Erasmus was influenced by famed humanist Alexander Hegius[1] and the Brethren of the Common Life.[2] Following his ordination in 1492 Erasmus began his advanced studies in Paris, Oxford and Turin where he specialized in Biblical Greek. Life was quiet for Erasmus in these early years until he returned to England in 1509 to teach Greek and Divinity, a position which later opened up the door to move to Basle in 1516, one year before Luther posted his 95 Theses.

Despite being a member of the Catholic clergy Erasmus did not fear calling out aspects of the church he disagreed with, despite the danger. Erasmus felt free to call out many questionable practices of his time:

There are monks and theologians who, induced by the savagery of their natures, by stupidity, by the delights of glory or gain, or, indeed, by private animosity, make savage indictments. Not only do their charges consist of trivialities or matters open to debate pro and con, they also perversely misrepresent even perfectly correct statements.”[3]

In true proto-Reformation style Erasmus viewed “most Christians of his age to be more superstitious than pious” [4] and that the monks were “those who, day after day, mumble their way through psalms.”[5]

These observations by Erasmus transformed him into what we would call today a “political satirist.” This willingness to critique “the system” and appeal to the people through sharp tongued humor prepared them for the coming theological storm. In Erasmus’s works Colloquies and the bestselling[6] In Praise of Folly he would blend together satire, Christian doctrine and Greek mythology to illustrate what was wrong with the church and how a Christian should live. Not even some of the reformers would go as far as Erasmus in critiquing the Catholic clergy as being “no better than jackanapes tricked up in gawdy clothes, and asses strutting in lions’ skins.”[7] It can be argued then that from these writings Erasmus challenged how the people viewed the church and instilled in them a the desire for change in that system.

Aside from his satirical writings Erasmus was still a scholar who sought to refresh the New Testament to make it more accessible in his generation. He determined to update the Latin text from its archaic form into a more modern style[8] and to produce a parallel Greek version of the New Testament inspired by Byzantine Textual tradition.[9] This work came together in 1516 as Erasmus’s Swiss publisher Johann Froben desired to be the first to market[10] with a new Greek New Testament motivating Erasmus completed the first edition[11] of what would later be called Novum Testamentum in only ten months.

This translation of the New Testament garnered both praise and criticism as several of his attempts to restore the text conflicted with several Catholic traditions. Erasmus was begrudgingly convinced to “correct” many of his changes in subsequent editions as “preachers warned from the pulpit against a man who dared to alter the Our Father and the Magnificat.”[12] For the first time in centuries long held Latin doctrine was forced to face Greek scripture as the people were witnessing the detours Latin doctrines had taken. For the later Reformers this scriptural restoration by Erasmus along with his quote “but there is… no one who cannot be a theologian.”[13] have contributed to the idea of sola scriptura.

Erasmus and the Reformation

Through his New Testament translations and his Paraphrases Erasmus was recognized as “the most widely influential New Testament scholar of his time.” [14] Later reformers such as Martin Luther, William Tyndale and Theodore Beza would base their own translations on Erasmus’s works. Even the creation of the King James Bible the pinnacle of Reformation biblical translations was based on works derived from Erasmus[15] making him one of the greatest influencers of the Reformation over the centuries.

As the Reformation dragged on people began to equate Erasmus’s critiques of the church and his teachings of humanism with the ideas of the Protestants. This left Erasmus facing the wrath of inquisitors and the censuring of his writings as “the conservative Catholics, on their part, viewed him as treacherous and unfaithful to the status quo.”[16] Erasmus was even driven to appeal to Charles V for support in a letter where he speaks of how “I have roused up against me the whole Lutheran faction, which I wish were not as widespread.”[17] Yet Reformers such as Zwingli, Melanchthon and close friend John a Lasco[18] still respected Erasmus. Even Martin Luther one of his fiercest opponents once commented, “I give you (Erasmus) hearty praise and commendation on this further account—that you alone, in contrast with all others, have attacked the real thing, that is, the essential issue.”[19]

Erasmus set the stage for the Reformation and unknowingly prepared the people for a change in how the church and clergy operated and in trying to bring people back to a simple approach to the scripture based on logic and piety. These were ideas the early Reformers resonated with and used them in their own challenges against the church. While Luther can be seen as the Father of the Reformation, he could not of had the impact on continental Europe without the shadow of Erasmus hanging overhead. While Erasmus never left the Catholic church his reception by the early Reformers truly made him not a father of the movement but an uncle of it, even if he was reluctant to be counted among their number.

After displaying the life and influence of Erasmus upon the Reformation I can find no better way conclude than with the words of Erasmus himself:

I perceive now, that, for a concluding treat, you expect a formal epilogue, and the summing up of all in a brief recitation; but I will assure you, you are grossly mistaken if you suppose that after such a hodge-podge medley of speech I should be able to recollect anything I have delivered.[20]

[2] A religious group founded by Geert de Groot in the Netherlands which advocated a life of devotion based on the teachings of Scripture.

[8] Similar to the issue many 21st century readers have with the King James Version and the need of having it be updated with the NKJV or other modern translations.

[15] Erasmus’s work was further developed by Theodore Beza whose translation was used in the KJV, and in the development of the Textus Receptus in 1633.

Article Name
Erasmus The Reluctant Uncle of The Reformation
Description
While relatively unknown in Protestant circles the efforts of Erasmus helped pave the way for the likes of Luther to rise up and critique the established Catholic church. But how exactly did this devout Augustinian monk become what we could call the reluctant uncle of the Reformation?
Cameron Conway
Cameron Conway
Conway Christian Resources Inc.
Conway Christian Resources
Publisher Logo